So during Closed Beta 2, I was on, playing, messing around, looking at things, datamining and all the usual, but, in terms of actual game-play, not as much.

This will be more of the overall experienced from both Alpha & the two Beta Phases and what I saw that I was not happy about as a gamer.

Pointed out in my Alpha Feedback & CBT1 Feedback, the servers have not improved at all. Below, find two runs I done recorded, a Low Level SOLO Dungeon run, which means, this could be potentially worse when there are actual players with me & a treasure collecting run. Honestly, I don’t see an excuse for such a bad servers for players, I jumped on my TERA account which is also published by GameForge and I don’t see any of these issues at all. This will be a very hard pass if the servers continues to be like this during launch. 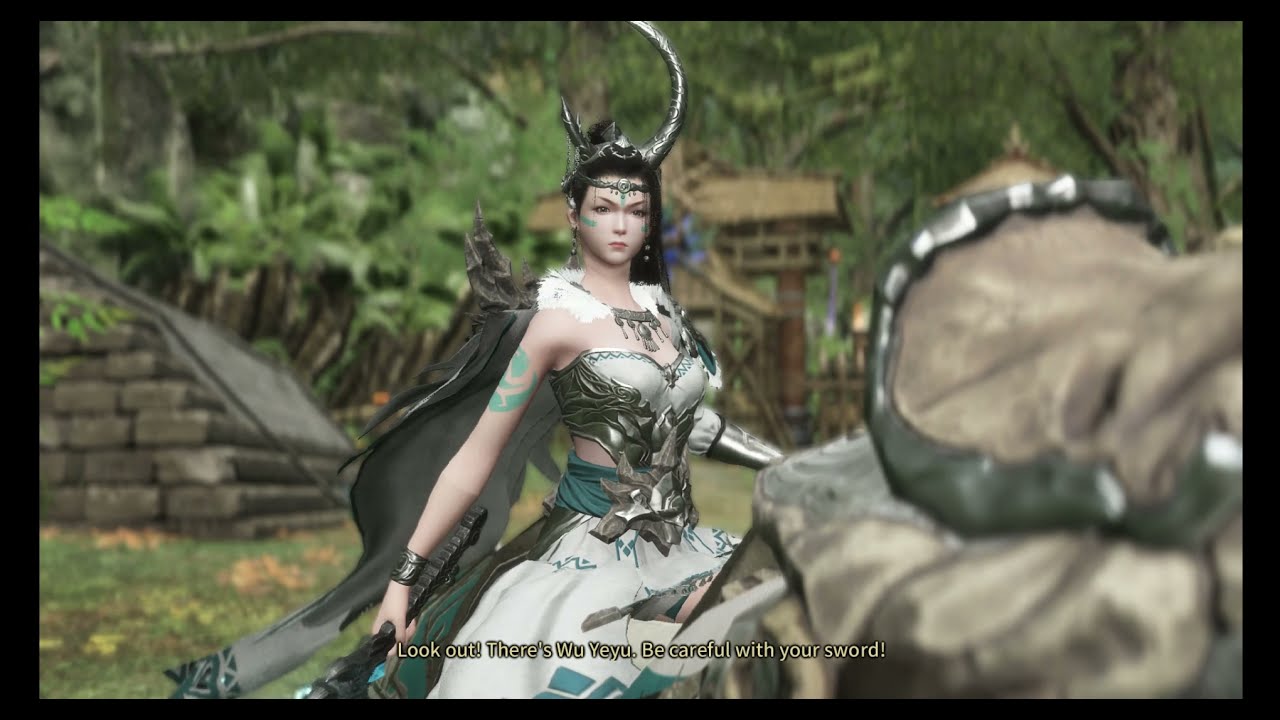 This one usually ain’t much of a difference to me, since I enjoy playing games muted while listening to music, but I had audio only simply just to experience the English voiceovers.

However, all I received was a constant headache, we had NPCs talk constantly over each other. Imagine a classroom with students talking and each one getting louder because they can’t hear it other, that what it felt like at times. However, worse, since some were having a conversation in English while receiving replied from another NPC in Chinese.

As for the English voiceovers, they weren’t the worse, I didn’t quite like it and would prefer the Chinese voiceovers while I also understand a large portion of the player base felt the same well. So on behalf of the community, we thank you for implementing the Chinese – English switch in settings. (Assuming it will be ready by launch)

While I do know they are working on it, I don’t see any improvements at all in any translated text at all.

In fact, this makes me remember Revelation Online, during Beta and Launch, the translations was horrible and that’s being very considerate.

As part of the community, and I am giving my personal opinion here, you should not be rushing into launching this game with translations this bad.

It gives the player base an uncomfortable feeling towards your ultimate goal, your priorities and how Swords of Legends Online will be managed moving forward.

Despite telling us constantly, this game will not have P2W elements, but still able to launch a full fledged working Cash Shop system while having things such as translation text that is worse than Google Translation itself really worries us.

Unless it gets updated in launch, my thoughts previous would be the same.

I know I am maining a spellsword, however, I am still unsure what 80% of my skills actually & explicitly do. While playing over 30 hours in Alpha and even more in Beta, whilst majority of the time on my spellsword, that’s quite sad.

They are still quite a lot of different translations of names in multiple ways; which I am assuming it’s all pointing at one name. This needs to be fixed as it gets super confusing.

For example, in one paragraph, it referred to the player as “Players, Immortal & Student”. While also talking about level requirements as “students”. Which is completely confusing to an average reader and even worse to an non-native English reader.

I am looking forward to big improvements in this aspect for launch. We know we will not be receiving “new content” for launch, this & Server Stability should be the #1 priority to address.

While the annoying tooltip this was addressed awhile back, it was never confirmed officially in any streams of documents stating so. It still remains as annoying as ever in CBT2.

I wish to see an option in turning it off for launch or post-launch.

While that tooltip is annoying, what frustrated me even more was the excessively large quest pointers. While having 1 isn’t too bad, but when you have multiple quests up, it starts to cover majority of your view and really starts to get in your way.

I am glad Gameforge had “something” potential in plan for additional Character Customization confirmed in the Pre-Beta2 Stream Q&A. I do hope it isn’t just shoved in the Cash Shop forcing us to purchase for those additional customizations.

The base options needs a good overhaul, while additional “fancier” customization in Cash Shop will be 100% OK with me.

While, I don’t see this ever been improved until we switch to an UE4 System when the entire Combat System/Targeting System is redesigned.

This feels like an Glorified Tab-Target System that is labelled under action combat. Instead of an true action combat game.

A true action combat game I would refer to as KurtzPel, Genshin or Black Desert Online.

All I can see is that, this may be quite difficult to manage, for big PVP fights, as you really don’t have as much control over who you are targeting at all. Even when you “Tab-Locked” a target, you don’t ALWAYS attack them, despite being in range of the target.

Finally, let’s move on to my main dish for the day and the sole reason why I was interested in Swords of Legends Online.

SOLO does something very different to most MMORPG. Nearly every MMORPG including one of the biggest ones in the industry; World of Warcraft has the same issues but not SOLO.

It does not mix both PVE and PVP together, what I mean by this is, you can’t do PVE to gear for PVP and your PVE gears are absolutely not OK to PVP in.

As a game where an average PVP player who does not want to engage in any Raids/Dungeon content, they won’t feel like they are being punished and still stay super relevant in the PVP field.

This is why Swords Of Legends Online is such an attractive title for PVPers. It divides PVE and PVP completely separately.

Yet I am hearing so much noise from players saying to “cancel” PVP. “Ramage Mode Everyone so Gameforge will removed PVP”.

I do not like this cancel culture stuff, it is not only toxic, selfish and narcissistic to the extreme. The world does NOT revolve just around you. All players of the community have opinions worth as much as yours.

Each game will have it’s ups and lows, you provide your feedback and either live with it or move on.

Your toxic attitude is actually alot worse than actually being PKed in game.

I see the issue for both sides however, have anyone considered the fact that if you do get “PKed” in the open world, you actually lost nothing and you are getting frustrated over nothing?

This isn’t Albion Online where you loose everything, nor is it Runescape or Path of Exile. The Open World PVP is simply a joke compared to other “PVP” orientated games.

I know some MMORPG in the past I played and loved such as Silk Road Online where you lose your gear enchantments and sometimes lose your gear for just going red. Or Runescape where you could loose everything just for dying.

I am fine with this system as it is as only the “PKer” have consequences and those consequences are quite harsh as well, while it’s not a PVP-orientated MMORPG, it has a good amount of PVP which really does fit in a wuxia based lore. What is martial arts lore without some PKing?

Further, on the topic of PVP, having both the issues below not being discussed at all, which still presents an issue.

I received confirmation that NA Server time was in EDT. While the notice from GameForge for PVP times listed in SOLO PVP Modes are in Server Time.

Which means, it is actually even worse then what I originally thought in CEST time. At least in CEST time, we would at least play at night after 9PM, but now, PVP is throughout the day and closes around 3 PM give or take in AEST.  For a full time worker like myself and many other Australians, this just means, a complete no-go for us. Despite catering the game to us, you present us no VPN such as Exit Lag to help reduce/stabilize our terrible ping, pretty much no PVP content unless we are up at odd hours/no work. It does not seem that you are looking after this portion of players at all. We may not be the majority of population base, but it’s been awhile since I seen conditions this bad for a MMORPG offered to Oceanic players.

As If time gating was the only issue, they also placed a restriction on in team composition.

In arena premade groups, you cannot have more than one of the same class(or spec) and only one class is allowed to be a healer

This not only makes it very difficult to play with your friends if you are playing the same class/spec, but discouraging to all PVP players out there.

If 3 friends are all playing DPS bard, they should be able to queue into Arena as a DPS bard any limitations. I understand about having only 1 Healer, I understand about no Tank queuing. But Class/Spec Restrictions is beyond excessive.

Personally, I want Swords of Legends to succeed, whether I am playing or not. It will be a good change in the industry.

However, I am still finding it very hard to with the issues presented above for myself to play it.

While instead of focusing on all the negatives, I do want to give some kudos to the team as they have heard some feedbacks and have been busy implementing features in such as the Faction PVP Mode. Or the selection between Chinese and English language voiceover.

However, to me, a foundation of the game is much more important than QOL features and additional content.

Right now, the foundation of Swords of Legend to me is riding on a hype of the terrible MMORPGs being released in addition being a wuxia title that has not been seen in years.

Despite having a solid list of End Game Content for Launch, I have seen quite a bit of feedback being disappointed knowing that majority of the content is progress “time-gated”.

This makes us feel this game is just another daily for us, we jump on, complete our dailies & weeklies, cap out whatever prestige and PVP limits we got, and we can’t “do anything more”.

This is the foundation of Swords of Legends Online, it’s enough for players to leave after the first few months, despite having a solid core game, future vision and path.

I will continue to wait to see what GameForge brings forward and changed in Launch and whether they will keep to there promises of no to P2W.

Here a poll below of what you think of the game so far. My thoughts are still the same, considering refunding.

Why You Should Play Genshin Impact
June 5, 2021